Ceremonial magick is the act of using specific symbols, words, and actions to invoke or summon spirits. It often involves the use of elaborate rituals and enchantments. Witches and other magickal practitioners use ceremonial magick to achieve their goals.

Ceremonial magick can be used for a variety of purposes, such as healing the sick, overcoming obstacles, or summoning spirits. It is important to remember that ceremonial magick should only be attempted by experienced practitioners. Those who are new to this type of magick should consult with an adviser before attempting any rituals.

What is Ceremonial Magick? 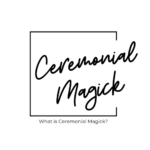 Ceremonial magick is a system of beliefs, practices and rituals that seek to harness supernatural or magical powers. It includes both “high” magic, which involves elaborate ceremonies and invocations, and “low” magic, which relies on more simple spells and charms.

Where did it come from? 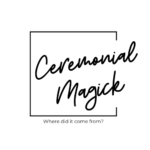 The origins of ceremonial magick are uncertain, but it likely has roots in various ancient pagan religions. It also draws heavily from the works of medieval scholars, who attempted to systematize and codify magical knowledge.

How is it practiced? 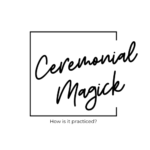 Ceremonial magick often involves the use of rituals, symbols and special clothing or equipment. These can be used to invoke specific supernatural beings or forces, or to promote a desired outcome (such as good luck or success in love). Many ceremonial magicians also make use of talismans, amulets and other charms.

What are its goals? 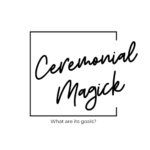 Ceremonial magick can be used for a variety of purposes, including personal transformation, healing, divination and precognition (foresight), controlling others’ actions or influencing events. Some ceremonial magicians also seek to contact or summon supernatural beings such as angels or demons.

Who practices it? Is it dangerous? 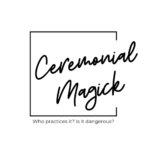 Ceremonial magick has been practiced by people of all cultures and religions throughout history. Today, it is most commonly associated with the Western (or “Hermetic”) tradition, which emerged in medieval Europe. While ceremonial magic can be harmless if used responsibly, some experts warn against its misuse – particularly when summoning dangerous spirits or attempting to control others.

What are some famous real-life examples? 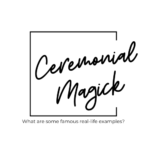 Famous historical figures who were interested in or practiced ceremonial magic include King Solomon, Pope Sylvester II, and John Dee and Edward Kelley. In more recent times, Aleister Crowley – considered by many to be the most influential magician of the 20th century – was a well-known practitioner of ceremonial magic. 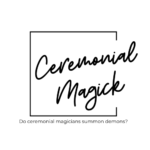 Ceremonial magicians may attempt to contact or summon demons, but this is not always the case. Some ceremonial magicians work only with “good” spirits, such as angels; others believe that any spirit can be beneficial or harmful depending on how it is treated.

Do they worship Satan? 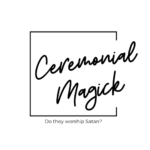 Worshiping Satan – or any other specific deity – is not a requirement of ceremonial magic. Many ceremonial magicians consider themselves atheists, and some even view magic as a science rather than a religion.

Do they offer sacrifices? 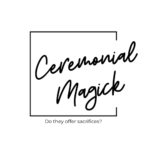 Ceremonial magicians may offer sacrifices during their rituals, but these are usually symbolic in nature. For example, a magician might offer a small amount of food or drink to placate an angry spirit – much like one might leave out milk and cookies for Santa Claus. 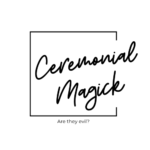 Ceremonial magicians are not inherently evil, but some people – particularly those with religious or moral objections to magic – may view their activities as such. It is important to remember that ceremonial magic is a system of beliefs and practices, not a set of absolute ethical principles. As with any belief system, there are good and bad ways to practice it.

This Witchcraft Supplies Starter Kit is perfect for anyone who wants to get into witchcraft! It includes all the basic supplies you need to get started, like candles, herbs and incense. Plus, it comes with a cute little cauldron too! This is a great buy for the value!