Irish witch names are a unique well to draw from when trying to choose a magical name. Whether you’re an Irish folk witch or simply someone that loves Irish mythology, you are sure to find a name you love on this list!

These Irish witch names are separated into two groups: Historical Irish witches and mythological Irish names. From Mary Dunbar to The Morrigan, these names can often pass as a normal name or they can be as strange and fantastic as you desire.

Many of these Irish witch names will be familiar to you. They’re from famous witch trials of the past. Some of the most famous witches put on trial were Irish, in fact!

This is hand carved wooden small figurines of the Celtic goddesses - Morrigan, Brighid and Domnu.

They are made of linden tree and are covered with linseed oil and wax. 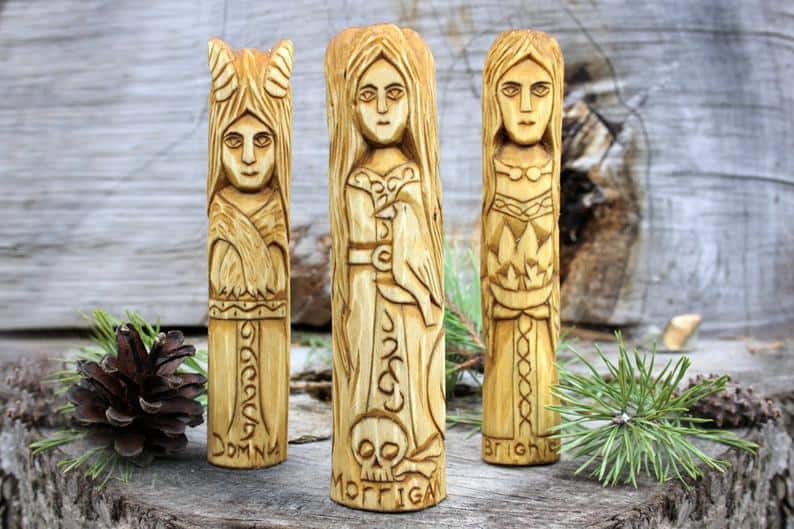 Alice has the unenviable position of being the first person condemned for witchcraft in Ireland.

She fled her sentencing, but her servant was flogged and burned to death for her crimes.

She was accused of murder, denying Christianity, sacrificing animals to demons, holding secret meetings at night, using magic to control Christians, and having a familiar.

Also known as Petronilla de Meath, she was the maidservant of Dame Alice Kyteler.

She was tortured and forced to admit that she and Alice were guilty of witchcraft.

These were the charges brought against her by the Bishop of Ossory:

… that they were denying Christ and the church; that they cut up living animals and scattered the pieces at cross roads as offerings to a demain called the son of Art in return for his help; that they stole the keys of the church and held meetings there at night; that in the skull of a robber they placed the intestines and internal organs of cocks, worms, nails cut from dead bodies, hairs from the buttocks and clothes of boys who died before being baptized; that, from this brew they made potions to incite people to love, hate, kill and afflict Christians; that Alice herself had a certain demon as incubus by whom she permitted herself to be known carnally and that he appeared to her either as a cat, a shaggy black dog or as a black man aethiopos, from whom she received her wealth; and that Alice had used her sorcery to murder some of her husbands and to infatuate others, with the result that they gave all of their possessions to her and her son.

The “Witch of Youghal” was tried in one of the most important witch trials of Ireland in 1661.

She was accused of bewitching a young girl and one of her jail sentries.

Florence Newton wasn’t tortured unlike many witch trials. The young girl she is claimed to have bewitched had many visions of her, though Florence tried to stop the girl from spreading rumors about her.

During her trial, she stumbled over saying the Lord’s Prayer. Despite having a teacher appointed to her to teach her the prayer, she could never get it right. This was seen as damning evidence that she was a witch.

Bridget Ellen Early was an Irish herbalist known for helping her neighbors against the wishes of the local landlords and Catholic priests.

Obviously, she was accused of witchcraft for her healing.

Biddy never asked for money for curing her neighbors, instead letting them choose how to compensate her.

She was famous and popular at the time. Few agreed to testify against her at her trial, and those that did backed out later.

She was released due to a lack of evidence.

My Pick
The Morrigan Ritual Candle
$32.00

Dragon’s Blood with mugwort and amethyst 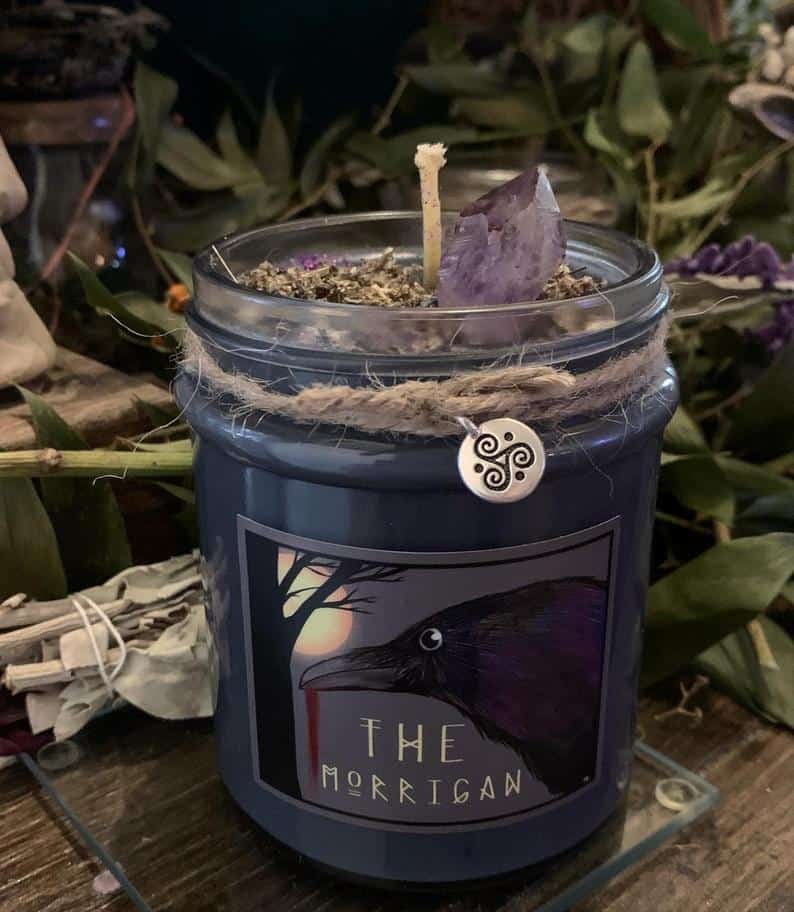 Irish mythology has many powerful and interesting women. Their names may be a little odd to non-Irish readers, but they are also beautiful.

A deity or triple goddess that sometimes appeared as a crow. She is the Irish goddess of death, destiny, and fertility.

Aine means “radiance”, and is the name of the Irish Celtic goddess of love, fertility, wealth, summer, and sovereignty.

She is sometimes represented by a red mare.

Most well known now as a Christian saint, Brigid is a pre-Christian Irish goddess and a member of the Tuatha De Danann.

Associated with spring time, fertility, healing, poetry, and smithcraft, she is a popular goddess.

She is celebrated during Imbolc or Candlemas.

Ernmas is an Irish mother goddess and a member of the Tuatha De Danann. She had many daughters, all of them goddesses.

Fionnuala, in mythology, was transformed into a swan and cursed by her stepmother. She wandered the lakes and rivers of Ireland until a marriage broke the curse.

Possibly one of the three goddesses that make up The Morrigan, Nemain personifies the chaos and havoc of war.

A tragic heroine, she is known also as Deirdre of the Sorrows.

It was prophecied that she would grow up to be beautiful, but that kings and lords would go to war over her.

She is similar to Helen of Troy, in that way.

Possibly one of The Morrigan, Macha is a sovereignty goddess and is associated with the land, fertility, war, horses, and kingship.

A powerful female prophet and poet, she foretold carnage when the armies of Medb and Ailill mac Máta face Ulaid and Cú Chulainn.

The owner of a magic harp, Aibell was a guardian spirit of the Dalassians. Those who heard the music of her harp did not live long after. 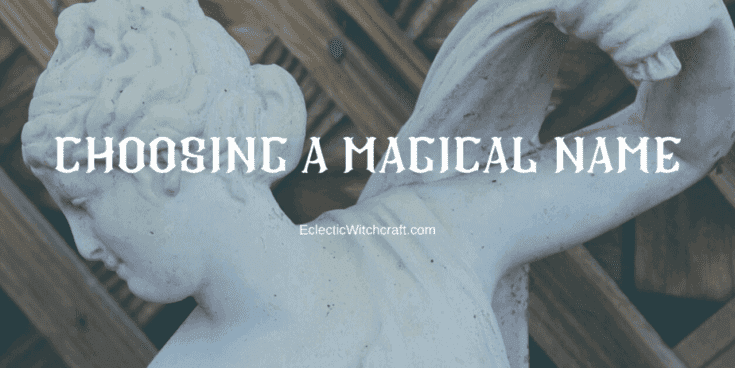 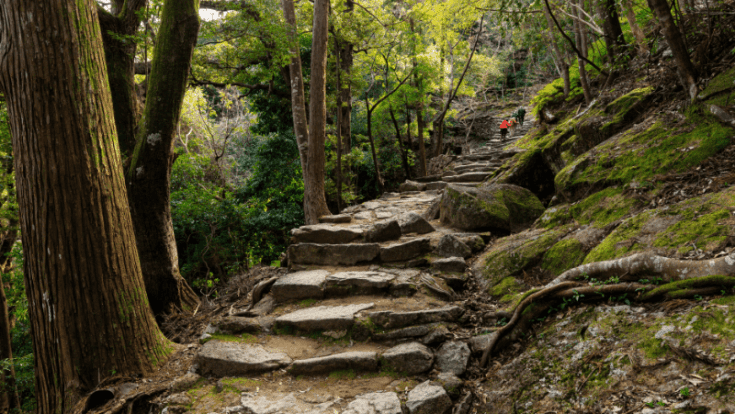 The New Year is a great time to start fresh, and what better way to do that than with some magical help? This witchy book will show you how to properly plan your new year's goals and when to cast them, using lunar phases, planetary hours, planetary days, and monthly correspondences.

Are you ready to unleash the power of simmer pot spells in your life? In this guide, you'll learn everything you need to know about using these potent potions for wealth, abundance and success. From different recipes to ways of making them more powerful, this ebook will show you how to use simmer pots to create the life of your dreams. So what are you waiting for? Pick up a copy now and let the magic begin!

The different styles of simmer pots I will cover in this ebook are:

Learn the deepest secrets of your moon sign in this comprehensive guide!

By understanding your moon sign, you can get a much deeper insight into yourself – both on an emotional level and in terms of your true inner desires. With this knowledge at hand, you'll be able to make more informed choices about all areas of life that impact you, from relationships to career paths.

In this guide, we'll cover everything you need to know about moon sign astrology – from the basics of each sign to how it affects your moods and emotions. We'll also explore what your unique moon sign means for your spiritual journey and witchcraft, and how you can use this information to create the life you've always wanted.

So whether you're just getting started with learning about astrology or you're a seasoned pro, this guide will give you the insights you need to understand your moon sign like never before.