Many modern pagans feel called to Hades, but how do you know if Hades is reaching out to you? If you feel like you may be called to worship Pluto or Hades, it is important to spend time researching the deity and connect with other followers. You may find that you have a sudden interest in Hades or Pluto, feel called to learn more about him, or receive dreams or visions related to the god. Consider keeping a journal of your experiences and studying ancient Greek mythology to better understand the role of Hades in history and religion.

But how can you tell if Hades wants your devotion? Look for the signs!

Signs That Hades Wants Your Devotion

If Hades is trying to get your attention, he may do it in a few ways. Consider his associations, and try to meditate on the signs you’re getting. Here are just a few possible signs:

1. You suddenly have a strong interest in Hades or Pluto.

If you have a sudden interest in this god, that’s a pretty clear sign that he’s reaching out to you. He may want you to honor him through prayer or worship, or he may have a specific task for you to do in his name. Either way, it’s definitely worth exploring this new interest further.

2. You feel called to learn more about him.

Well, if you feel an inexplicable urge to want to know more about Hades – despite having no prior interest in Greek mythology or religion – it may well be that the god himself is nudging you in his direction! He wants you to learn about him and perhaps even devote yourself to him; after all, he is the ruler of the Underworld and deserves respect. If your curiosity has been piqued by Hades out of nowhere, take it as a sign that he could very well be trying to reach out to you from beyond the veil.

3. You receive dreams or visions related to the god, particularly of the underworld or realm of death.

There are a few ways that this could be interpreted as a sign that the god Hades wants someone to devote themselves to him. Firstly, if a person is regularly having dreams or visions related to Hades, it is possible that the god is trying to communicate with them and draw their attention to his sphere of influence.

Secondly, if someone feels called or drawn to learn more about Hades and his realm, it may be because the god wants them to deepen their understanding of him so that they can better serve him. Finally, if someone has a strong connection with death or the underworld in general, it may be an indication from Hades that he would like for them to devote themselves to him and his domain.

4. Your interests begin to focus on topics related to death, such as ghosts, vampires, and magic (particularly necromancy).

While some may be put off by the potential darkness of such a connection, for others it can be very empowering. Topics related to death can also be seen as something potentially positive – after all, without death there could be no life. Asking questions about what happens after we die is one way of honoring those who have gone before us, and celebrating the cycle of life and death.

These signs may show up in your dreams or visions, guiding you towards a path of dark power and agricultural abundance. This is how Hades wants to be known and worshipped – through symbols of death, darkness, and fertility.

6. Finding money and coins in your path randomly.

Pagan folklore says that finding money is a sign of good luck. But if you find an abundance of coins and other forms of currency in your path, it could be a very potent sign that the god Hades wants you to devote yourself to him. It’s said that he often rewards those who show faith in him with great treasures, so this could be his way of showing you his favor.

7. Suddenly getting promotions or raises at work without asking.

There are a few potential explanations for how this could be seen as a sign from Hades. Perhaps the individual is finding increased success in their career thanks to unseen help from the god, or maybe the extra money found represents gifts bestowed upon them by Hades himself. Alternatively, it could simply be that these lucky breaks and financial windfalls occur more often when one pays attention to and worships Hades, leading you to see him as a generous deity who rewards those who honor him.

The God Hades is known to be the ruler of the underworld and is associated with death, darkness, and wealth. If someone suddenly finds success in a new business venture or project they have started, it could be seen as a sign that Hades is showing you the benefits of his influence. This could be a beckoning for the person to devote themselves more fully to him and his dark realm.

9. You find yourself attracted to power, strength, and secrets.

The fact that you are attracted to power, strength and secrets can be a potent sign that the god Hades wants a pagan to devote themselves to him. This is because these qualities represent what Hades stands for – he is the ruler of the underworld, and has control over all aspects of death and mystery. If you feel called to follow him, then embracing these qualities will help you connect with his energy and make your devotion stronger.

The simplest way to know he wants your devotion is to just feel the presence of Hades in your life. If he wants you to devote yourself to him, it will be very difficult for you not to feel his presence. This god’s energy feels intense, dark, and foreboding. If you suddenly start having these feelings in your life and can’t explain why, it’s likely that Hades is trying to get your attention.

Symbols Of Hades That May Pop Up In Your Life

These symbols may start popping up in your life more often. Synchronicities with symbols of Hades can be a good sign that he wants your devotion. You may see these symbols in dreams, in your waking life, in movies, or anywhere else. If you feel drawn to these symbols or compelled to learn more about them, it may be a sign from Hades that he is reaching out to you. His symbols include:

If you see any of these symbols around you frequently, it may be a sign that Hades is reaching out!

How To Be Sure That Hades Is Asking For Your Devotion

One of the best ways to figure this out is through meditation. Focusing on speaking to Hades or whatever presence it is you feel around you and asking for guidance can be incredibly helpful.

It’s also important to look at your own heart and intentions. If you’re wanting to connect with Hades out of a place of love, respect, and devotion, then it’s likely that he is interested in working with you as well.

Divination is another great way to get clarity on this issue. Doing a simple reading with tarot or oracle cards can give you some insight into whether Hades wants your devotion or not. I like to ask my cards what specific deities want me to know. Signs of desires devotion will depend on the tarot or oracle deck you choose to use, but some things to look for in the card images are fire, death/rebirth imagery, or anything related to transformation.

If you don’t feel comfortable doing these things on your own, you can always ask a trusted friend or family member who is also pagan/witchy for their opinion. Oftentimes they will be able to offer helpful guidance and clarity that you may not have been able to see yourself.

Deciding If You Want To Work With Hades

Contrary to popular belief, you don’t have to work with a deity just because they want your devotion. This is especially true if the request comes from someone whose energy feels off or negative – such as an entity of darkness like Hades. While balance is always best in witchcraft, there are valid reasons to avoid darker deities. Some examples include:

These reasons and many more can help guide you toward making decisions about which deities to align yourself with. If it’s still unclear after all this, then maybe it would be better for now to stay away from Hades until your heart has healed enough so that he won’t trigger any painful memories or emotions.

At the same time, consider how such an influence can actually be very healing for you. It could bring up issues like abuse and unhealthy relationships while helping you find ways to release them in healthy ways through spellwork and journaling! There is no right answer here, only your beliefs and lived experiences.

Hades, in my experience, is a loving and calming influence in my life. He pushes me to develop myself spiritually but never tries to force anything on me; rather, I am free to decide what path I wish to take with him at each moment of our relationship.

He helps me see the importance of taking care of myself emotionally and physically before focusing too much on others’ needs or desires. I pray his presence in your life will do the same for you as well.

This beautifully crafted statue of Hades, the Greek god of the underworld, is a great addition to any pagan altar. Made from high quality designer resin and cold cast bronze, this statue has a wonderful metallic finish that makes it perfect for display. Measuring 9 inches tall, this statuette comes packaged in a gift box with felt on the bottom to protect surfaces. Features Cerberus, the three-headed guard dog of the underworld, at Hades feet. 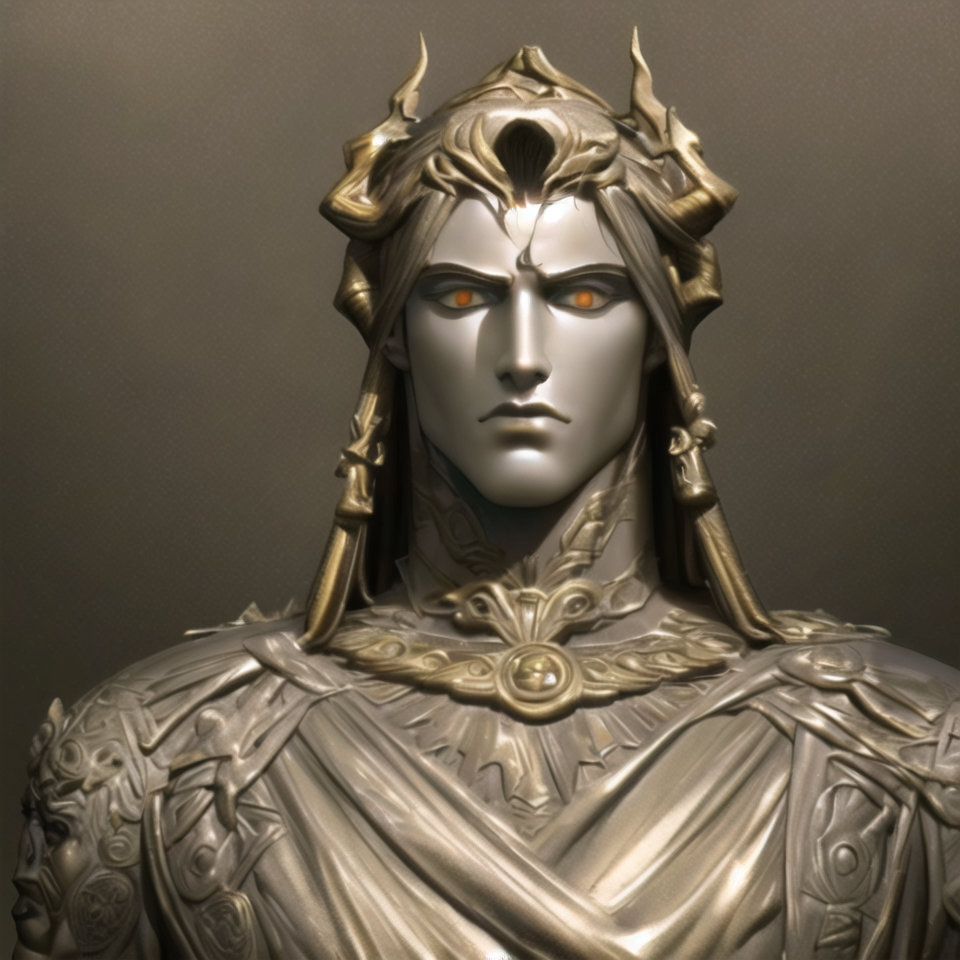