According to the series’ head writer Jeremy Slater, Khonshu is a very powerful god, but also a very insecure one. He is prone to temper tantrum when he doesn’t get what he wants. He is also very vengeful towards those who wrong him. He makes mistakes too. He is also arrogant and self-centered.

Is Moon Knight A God?

Moon Knight is a man who has taken on the mantle of Khonshu. He is not technically a god but rather a mortal hero that has been blessed by the gods.

Going by the name of Khonshu, the being grants Marc Spector his powers to do his bidding.

The god behind Moon Knight is a god of the moon. His parents were Amun and Mut. Amun is a member of the Ogdoad. Mut was a mother goddess.

Moon Knight himself is a Marvel comics character with Dissociative Identity Disorder. Khonshu uses this disorder to his benefit to take control of Marc Spector.

Khonshu chose Marc because he was the most suitable person to represent him. He wanted someone who could be very successful in business but also had a strong moral code.

Marc Spector, better known as the vigilante Moon Knight, was once a mercenary left for dead in the desert, where he was revived by the Moon god Khonshu.

In ancient Egypt, Khonshu was a popular deity. Children were given names based on Khonshu, and he was worshiped throughout the country. The Egyptians believed that Khonshu traveled across the sky each night, and he was also associated with the rising and setting of the moon.

Khonshu was worshiped in temples throughout Egypt, and he was also revered in other countries. He was called upon when someone was ill, and he was believed to have the power to heal, protect, and guide. Khonshu was particularly important to women, and he was often seen as a fatherly figure. He was also believed capable of bringing good fortune.

Khonsu had a darker side too: he ate other gods, and was known as “Khonsu who lives on hearts”.

Khonshu was depicted as a mummy with a sidelock of hair, which was a symbol of childhood.

Khonsu was an ancient Egyptian god who was depicted as a falcon wearing a moon disk on his head. He was also depicted as a human child.

In the Moon Knight television show, Khonshu has the head of a bird and is wrapped up like a mummy. He wields a crescent moon staff. When Khonshu is influencing Marc Spector, he is also wrapped up in white bandages.

Try this next: Herbal Remedies That Invoke The Fire Element

What Is Khonshu God Of?

Khonsu is known for his violent nature, and has been described by ancient sources as blood thirsty. Khonsu had a reputation for being a god of war, and used his powers to inflict illness upon mankind.

Khonshu (voiced by F. Murray Abraham, performance capture by Farim El Hakim) is a pretty aggressive and pervasive god in Moon Knight. His efforts to interfere with human affairs have earned him the contempt of the Ennead. Otherwise, he is quite insistent in trying to get Marc and Steven to do his bidding, even going so far as to haunt the latter in order to keep him in line. Through Marc, Khonshu certainly isn’t afraid to enact violence against those who oppose him.

Whenever there is a full moon, Khonsu draws out his full power. Khonsu uses these powers to cause sicknesses and diseases among humans.

Even his powers of healing make it into the show, with Moon Knight’s suit having healing properties to help Marc survive blows that would otherwise be fatal. Khonshu can even turn back the night sky by thousands of years.

Is Khonshu A Good God?

Khonsu was both fierce and a healer. However, while he did heal people, he also caused them harm. This makes Khonshu hard to categorize as either good or evil.

In the Marvel comics and Disney+ show, Khonshu is mostly a protector. At the same time, he is bloodthirsty and not afraid to kill and hurt people. He also isn’t very kind to the personalities of his host.

Add the moon god Khonsu to your pagan altar! These statues come in various styles and sizes, and can be used for any type of ritual you might have planned, from fertility rites to protection rituals. 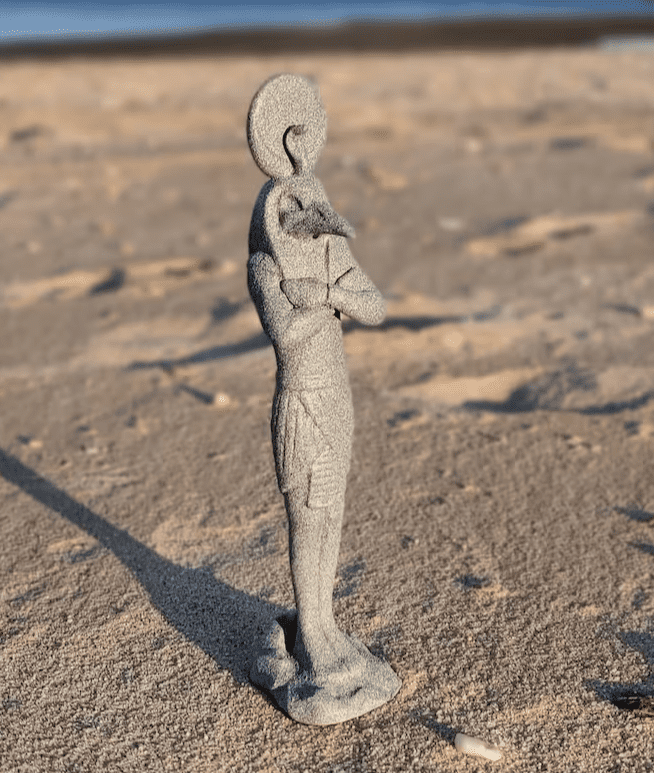 Who Are The Ennead?

The Ennead are the nine deities of creation, who rule over all aspects of life. They are known as the ‘Great Gods’ and were worshipped by the Egyptians before the birth of Horus, the god of light. Atum, Shu, Tefnut, Geb, Nut, Osiris, Seth, Isis, and Nephthys. Each of them represents an aspect of the universe, such as death, justice, order, chaos, love, war, time and space.

While Egyptian gods may appear human-like, they are still deities. Their appearances are based on how humans see them.

Moon Knight’s Khonshu is not part of the Ennead. He is a separate deity who represents moon. Ammit is a goddess who devours souls. She appears as a hideous creature who consumes people. Her appearance is based on how humans perceive her.

Who Is Khonshu in Marvel?

In the comic books, Khonshu is a member of the Heliopolitan pantheon along with other gods like Anubis, Atum, Bast, Bes, Geb, Horus, Isis, Neith, Nun, Nut, Osiris, Ptah, Sekhmet, Set, Seth, Sobek, and Thoth.

In the pantheon of African deities, Bast was a goddess of war and healing while Sekhmet was a warrior goddess who protected the people. In the Captain America: Civil War, T’Challa explains that death is not the end but a stepping off point. “You reach out with both hands, and Bast and Sekhmet, they lead you into the green veld where you can run forever.”

In the Marvel Universe he is a powerful sorcerer who has been known to inhabit the bodies of others. He can assume the appearance of others and grant them superhuman powers. He can teleport himself anywhere and appear to Spector in illusions.

What Does Khonshu Mean?

Khonsu is the Egyptian deity who represents the Moon and the night sky. He is associated with the underworld, but also with the afterlife, resurrection, fertility, and healing.

Khonsu’s name means “traveler”, which may relate to how the moon travels across the night sky. Hekate, another moon goddess of the Greco-Roman pantheon, has a name meaning of “worker from afar”. Moon deities tend to have these traveling or far-away themes in their names and epithets.

Why was Khonshu Worshipped as a God?

Khonshu’s major cult center was in Thebes. Khonsu is often shown wearing an eagle or hawk’s head like Horus, who is also associated with him. Khonsu is a great healer and a protector. He is usually depicted as a fierce deity, but he later rises to prominence in the New Kingdom when he is described as the “Greatest God of the Great Gods”.

Most of the construction of Karnak Temple was centered around Khonsu.

Khonsu’s reputation as an effective healer spread beyond Egypt. He is also known to be a protector against evil. A stele records how a Princess of Bekhten’s illness was cured when she arrived at an image of Khonsu.

What Are The Symbols Of Khonshu?