You may not have heard of spell sealing as a practice. It’s similar to charging a spell, and has nothing to do with what we traditionally think of binding or sealing in magick A spell seal is a way to lock in an action or intent for a spell. The person casting the spell has provided certainty about what they want. They have sealed the deal with their spell.

You can use seals in any type of ritual or spell.

Sealing a spell also means that you have made a commitment to do something, and you will carry out that commitment no matter what happens.

If you don’t follow through, you may find yourself regretting your decision later, and you might even start doubting your own ability to perform the task at hand.

If you decide to break your commitment, then you risk causing harm to yourself or others.

It is important to keep in mind that once you have committed to doing something, you cannot back out without serious consequences.

Why You Should Seal Your Spells

If you are performing a ritual to get rid of a problem, then sealing the ritual is a way to ensure that the energy of the ritual does not dissipate, but instead remains focused on the goal of getting rid of the problem.

You can use the same method to create a new positive habit, such as eating healthier food, or cleaning the house more regularly. By sealing the ritual, you are locking the energy of the ritual into a permanent state.

By creating that finalizing contract, you are increasing the potency of your will.

The end of something brings closure and can help set boundaries. It can provide a place to rest and reflect upon what has happened.

Because of these benefits, sealing your spell is essential for any practitioner who wants to create lasting effects.

If you seal your spell, it becomes more permanent and less subject to change. This means your spell will be much harder to modify, which can be good if it was a well formed spell. If you end up regretting it, however, that can become an issue.

It requires a greater amount of effort to reverse the effects of a sealed spell than to undo the same ritual without sealing. This is because the energy of the ritual has been locked into a specific outcome.

When you unseal a ritual, you are releasing the energy from the ritual so that it returns to its natural flow. Think of a dam on a river. It takes effort to break that dam down, but once you do the river can return to its natural flow pattern (though with some irreversible changes).

If the reversed spell caused the target to act in ways that were contrary to their own best interests, then they may not be able to go back to how they originally were. For instance, a love spell intended to break up two lovers would not necessarily reverse the effects of a breakup. The couple may not want to get back together, even if the spell reverses the breakup.

If the spell you cast is meant to influence someone else’s behavior, they will usually remain in alignment with whatever changes you made to them. They may even be happy about those changes.

You can’t always reverse a sealed spell. Sometimes you have to learn to live with the consequences of your actions, even ones you deeply regret.

Sealing Your Spells In Witchcraft

Sealing your spells means making sure they are properly bound and protected so that no one can alter them without your permission.

For example, if you are casting a love spell, sealing it could involve binding the spell to a piece of paper, writing out the words of the spell on the paper, and then burning the paper.

If you feel like you have worked hard enough on a spell, or you feel that it has reached its final stage, then you can seal it.

A sealed spell is similar to saying “so mote it be” or “amen” after a working. It’s signing your name, and saying you’re done adding more magic to this particular spell.

There are rituals for finality even in secular situations, such as when signing a lease for your new car. You sign it, it’s done, and the intention (the new car) is yours.

Not sealing a spell can lead you to feel as though something has been left undone, or that the spell itself has no effect. It’s important to seal your spells so that they remain focused and effective as possible. If you don’t seal them properly, you may find yourself lacking in energy, having trouble directing your magical power, or not knowing what to do next.

You may feel as if the spell hasn’t taken hold yet, or that you’re missing something. However, if you’ve done everything right, then you’ll know exactly what needs doing, where you need to go, and how to get there.

Here are some methods to seal and finish a spell:

This method is used for many different types of spells. When you shut a door, you are closing off an area, which prevents anyone from entering that space.

This method comes in many forms:

Like signing a legally binding contract, this form of finalizing your magic involves writing or carving intentions into something else.

The written seal can be used to express any type of agreement between two parties. Those two parties can be you and a god, you and the universe, or you and someone that has petitioned you to do magic for them.

Written seals can be made using anything that will leave a mark on paper, including ink, pencil, crayon, chalk, charcoal, graphite, sand, clay, etc.

A written seal can be created in any number of ways, depending on what materials are available. For example, a simple signature can be done using the thumbprint. However, more elaborate seals can be created using a stamp, a pen, or even a knife.

Another form of written seal is a fingerprint done in blood or ink.

Working With Hekate During The Full Moon

These seals are spoken aloud, either by you or another person. They can be said while holding a candle flame, chanting, praying, or simply speaking the words.

When you speak these words, you are creating a bond between yourself and whatever it is you are trying to influence. These seals can be used for any kind of binding, whether it be a contract, a promise, a vow, or a manifestation.

I bind myself to you, my love,

In all things I shall honor you.

My heart belongs only to you.

A kiss is often used to seal a magical bond between two people or objects. The idea is that by placing your mouth upon another object or person, you will be able to channel the power of the other into yourself or vice versa.

Seen on the CW show Supernatural with some demon deals, sealing with a kiss is actually a fairly common practice with witches. Sealing your spell with a kiss is most common during rituals like handfasting, where two people are vowing to remain together.

You can kiss objects, as well.

When you seal a spell with a kiss, you are saying that the spell is now more powerful because you have added your own personal touch.

Modern examples include the binding of the contract between a husband and wife in marriage. It is also used to mark a covenant or agreement between two people, such as a business partner, friend, or lover.

Candles are used in witchcraft to cast spells and for other purposes, but they can also be used to seal a spell. The wax can be dripped over envelopes, sigils, spell jars, and other magical objects to seal your intent. You can also carve into candles to seal spells into the candles themselves. 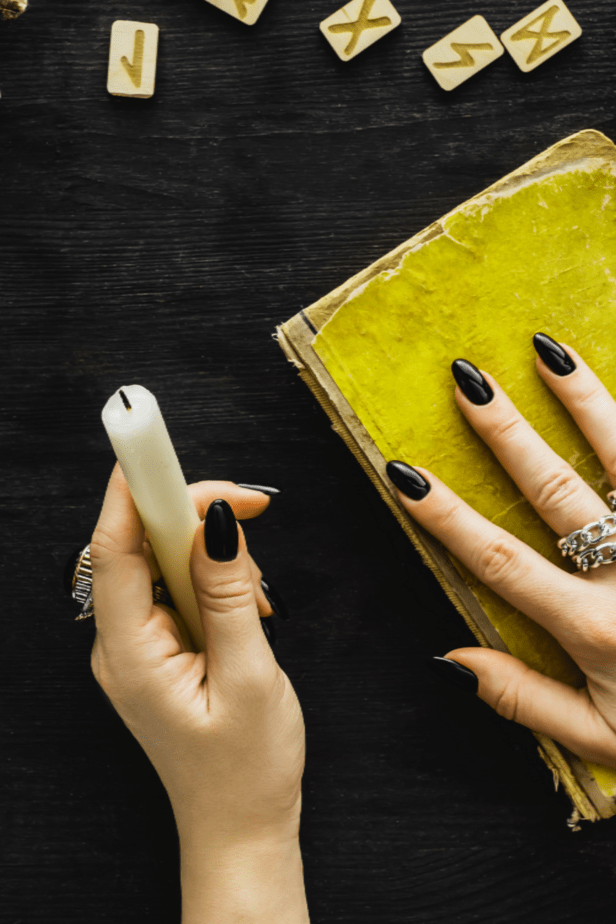 Destroying the ingredients used in your spells activates and finalizes that spell. Through burning, burying, or any other destructive means, you activate the creative principle of the universe to work with your intention.