Death is on the minds of many as we deal with the global pandemic from the coronavirus. Death represents the inevitable and the mysterious. In western culture, Death is viewed as a terrifying force, its personification an aloof and frightening figure.

Every religion and culture has its own way of dealing with death, but how do witches and pagans process this transformation?

Death is seen as a part of the cycle of life for witches, pagans, and others with Earth centered beliefs.

While the specifics of these beliefs will differ from witch to witch and pagan to pagan, there are some similarities that tie our beliefs about death together.

Book Of Shadows
Is Death The End Of Life, Or Does Life Continue After Death?
$0.99

What do witches think about death? Do we believe in ghosts, reincarnation, or heaven and hell? 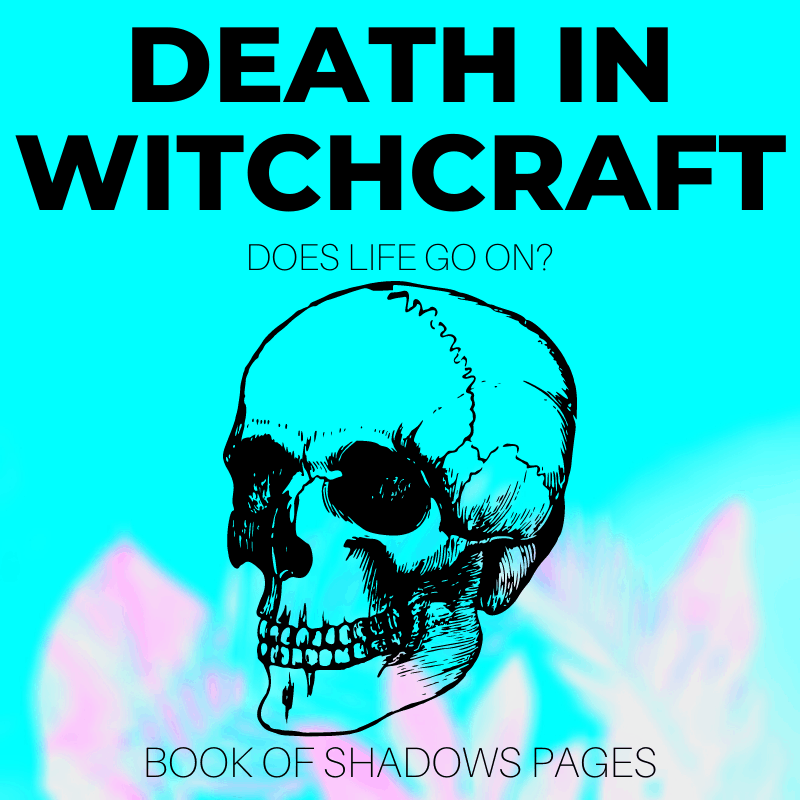 Is Death The End Of Life, Or Does Life Continue After Death?

Witches are natural philosophers. Death isn’t an end but a new beginning. Pagan views of death are different than the ones seen in other communities. Many of us believe that death is part of a sacred circle that is never ended. Life is always coming back after death.

Death is also considered to be part of a sacred evolution. The soul goes through many changes and experiences before it reaches its final destination. This is why we see so many similarities between life and death.

There is an afterlife, but many Wiccans don’t know what it looks like. Many forms of paganism teach that there is more to life after death than most people realize. Some pagan religions teach reincarnation or rebirth into another body.

Many pagan faiths also teach about heavens and hells. Those who practice paganism believe that we are spirit beings made material by our bodies. We need them to survive, but ultimately we must return to the spirit world.

I think as a group we tend to be stuck in our own heads, considering the different natures and aspects of things.

When it comes to the big questions of life, every witch is going to have a different thought or perspective.

When a witch considers, “What is death?” or “Where do we go when we die?” there will be a different answer for every witch.

Since witchcraft isn’t a religion and paganism isn’t organized like, say, Christianity, there is no real guide to what the ‘correct’ answer is.

As the old joke goes, ask 5 witches what they believe and you’ll come away with 6 answers.

I don’t really have a developed belief about death and the afterlife.

If I’m being honest, I am terrified of death.

No version of the afterlife brings me peace, but I am a work in progress.

Based on my experience with pagans and witches, most that I have spoken to don’t believe that death is the end.

There are, of course, some that take the atheist view that death is final and there is nothing after.

But from what I have heard, that’s actually a rare position.

Will We Become Ghosts? Will We Be Reborn After Death?

Many, but not all, pagans and witches believe that there is an afterlife.

Some believe we will be judged in that afterlife, as with Egyptian paganism where the heart is weighed once one enters the underworld (Duat).

Anubis, the god of the dead, weighs the person’s heart on a scale against the feather of Ma’at.

Unlike in Christianity, however, there was no set list of “sins”.

Each person had a different list of things they were meant not to do.

A farmer and a king’s list of Negative Confessions would be quite different indeed.

And so it goes with all pagans and witches.

There is no set in stone belief about death.

There is only what comforts you, what seems to be the truth, and what your personal religion holds.

Some NeoWiccans, for instance, believe in the Summerland.

This is a land described by author Scott Cunningham as a place where the soul goes to live forever.

But what the Summerland is for each Wiccan will again be seen differently.

Reconstructionist pagans often see the afterlife as it was described in their myths.

The Egyptian example above is one such myth, but there is also Valhalla in the Norse belief system and Hades for the Hellenic pagans.

And there are some that take the Hindu / Buddhist / Jainist belief of reincarnation, in its many forms.

Whether someone will be reborn a human, an animal, or an insect may depend on how they behaved in life.

Or maybe the witch or pagan believes that we are only reborn as humans.

In the end, what a witch or pagan believes about death and the afterlife will vary greatly between different sects and groups.

But those differences can create lively discussions that help bring everyone involved closer to the truth, and isn’t that what is most important in the end?

Book Of Shadows
5 Deadly Ways That Witchcraft Can Kill You
$0.99

This simplified PDF will teach you how witchcraft might kill you, without all the ads that distract you. This is the perfect option for your book of shadows! 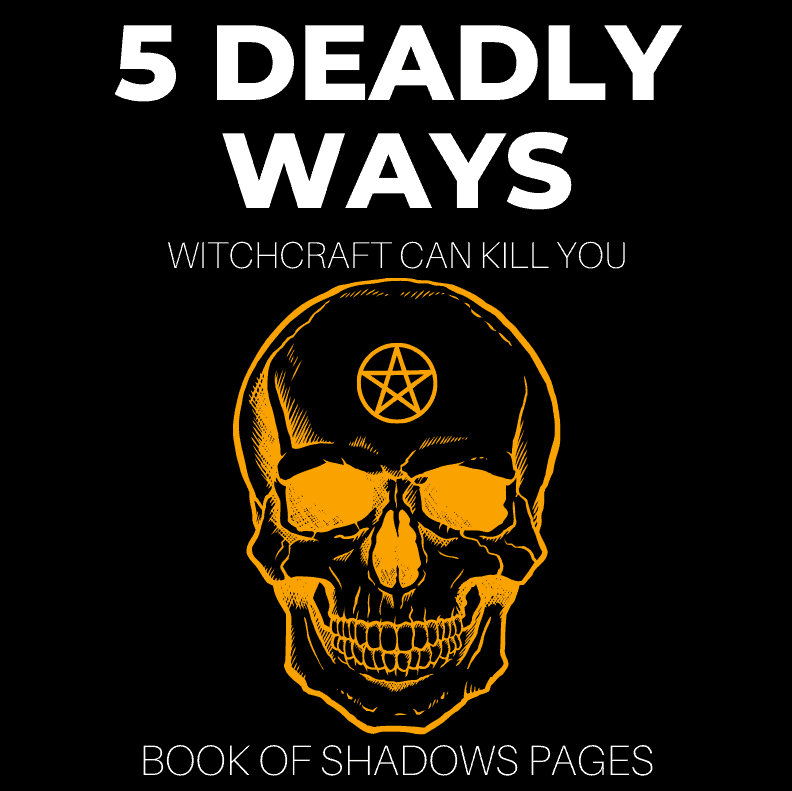 What Are Some Spiritual Symbols Of Death?

In western societies, the Grim Reaper is often depicted as a skeleton with a scythe. This symbolizes the harvest and the end of one life and the beginning of another. The Grim Reaper is also known as the Angel of Death.

The Grim Reaper is also associated with the idea of death being a natural part of life. In fact, it’s said that the Grim Reaper comes at night when people sleep.

There are other symbols of death that you may be familiar with.

A skull is another common symbol of death. It represents the transition between life and death, or between the physical world and the spiritual realm.

A tombstone is another common symbol of the passage of time and death. Tombstones mark the resting place of someone who has passed away. They can also represent the passing of an era and the end of something.

A cenotaph is a memorial structure that marks the site where a person was buried. Cenotaphs are usually found outside of churches and temples.

Hearses are used to transport dead bodies. When they arrive at their final destination, the hearse becomes a funeral home.

Vultures represent death because they eat carrion . Vultures are scavengers, so they feed off of anything left behind by humans.

The death’s head hawk moth is a beautiful and ethereal symbol of death. Its name comes from the shape of its face which resembles a skull.

Bones represent the body and what remains after death.

How Do Witches Honor Death?

There are many ways witches honor death. They may burn effigies of the dead person, they may leave food out for them, or they might dress up like the deceased and dance around the home.

A simple way to honor those who have died is to place photos of them on your altars. Witches also light candles and incense to celebrate the lives of the departed.

Some witches even make offerings to the spirits of the dead. These offerings could include herbs, flowers, wine, bread, or any other item that would please the spirit.

Many witches believe that if they commune with the spirits of the dead, then they might receive information from the spirits.

Death gods are often associated with the end of life, but also with new beginnings. They represent transition, change, and rebirth.

Most cultures have a belief that there is an afterlife, and they associate death gods with this idea. Often they are associated with the harvest, but they are also present at other times too, such as at Samhain, or the Wheel of the Year.

Witches and pagans use their craft to help them cope with death. Many believe that the spirits of those who have died reside in the land of the dead.

When you work with the dead often, your fear of dying may ease. The cycle of life, death, and possibly rebirth becomes just another facet of life.

Having this kind of spiritual anchor is very important for people who tend to fear dying.