Pagan prayer beads are beaded ropes that are worn around the neck or wrist, or simply held while praying. These beads are believed to help focus the mind and keep it calm. Many people wear them while meditating or praying to the gods.

They’re usually made out of wood, bone, metal, or stone. They’re also called rosaries, prayer ropes, or prayer cords. Most people are familiar with the Catholic rosary, but pagan earth religions and other cultural traditions include the use of personal prayer beads.

In addition to being a quick and convenient method of praying, Pagan Prayer Beads offer several advantages over more traditional methods of prayer such as rote memorization. First, they allow you to focus on the meaning behind each bead rather than simply repeating a series of words.

Second, they encourage you to develop a personal relationship with the gods. Third, they help you to remember your prayers throughout the day. Fourth, they provide a physical reminder of your prayers.

Finally, they give you something tangible to hold onto while praying, enhancing the sensory experience and improving your ability to recall your prayers.

I recommend using pagan rosaries to pray to Hecate, who is the goddess of witchcraft and magic. Hecate is also associated with the crossroads. Hecate is a very powerful witch goddess.

But before we go further, let me tell you something else.

Pagan prayer beads are magical tools used to communicate with deities. They can be used for meditation, healing, divination, and more.

Where to buy prayer beads

Etsy has many stores that offer prayer beads for any witchy purpose. 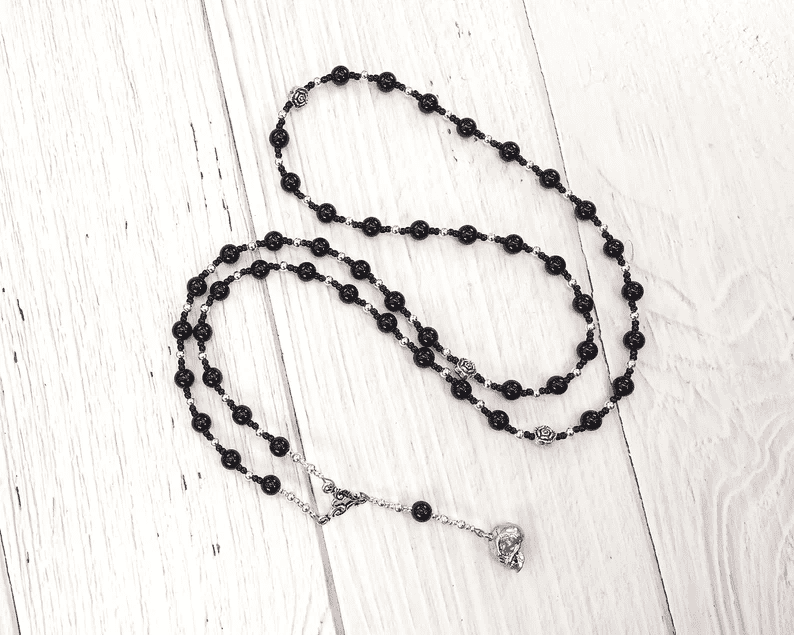 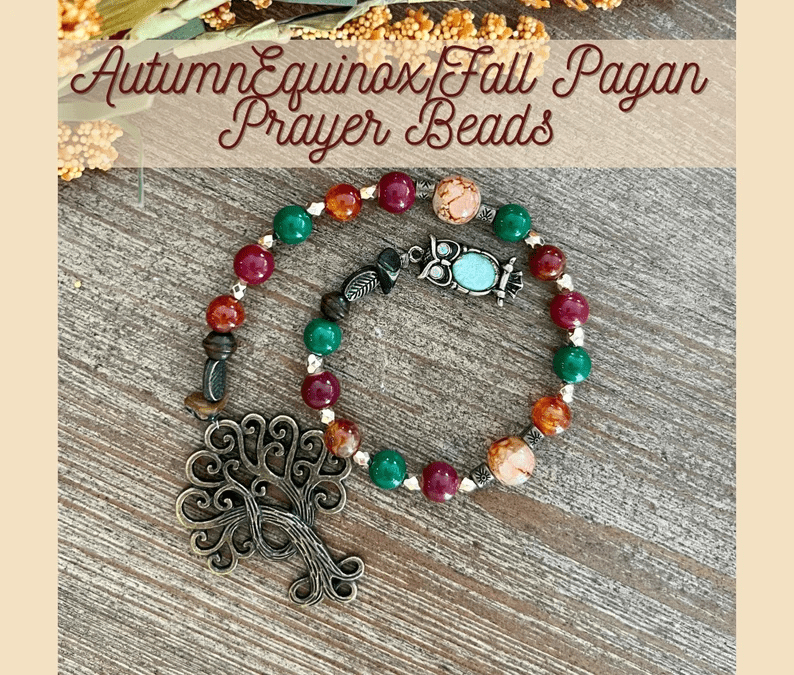 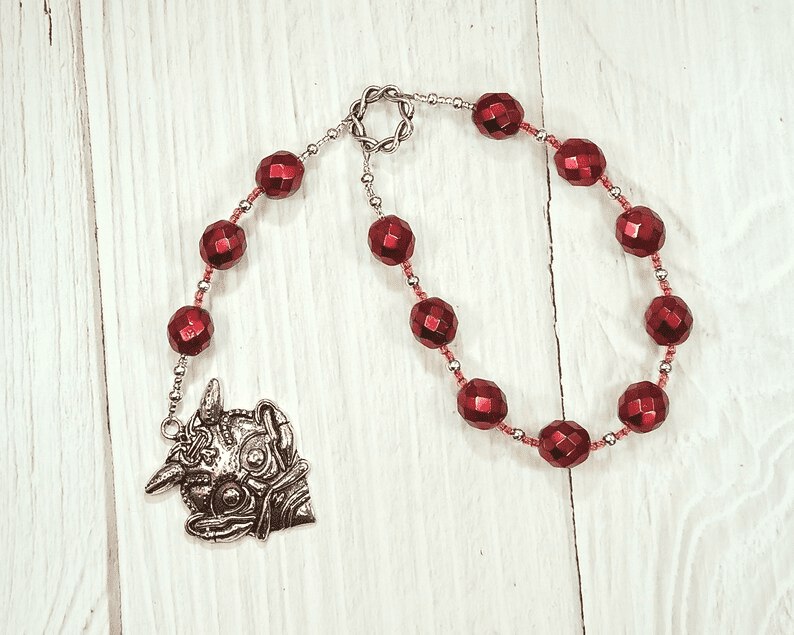 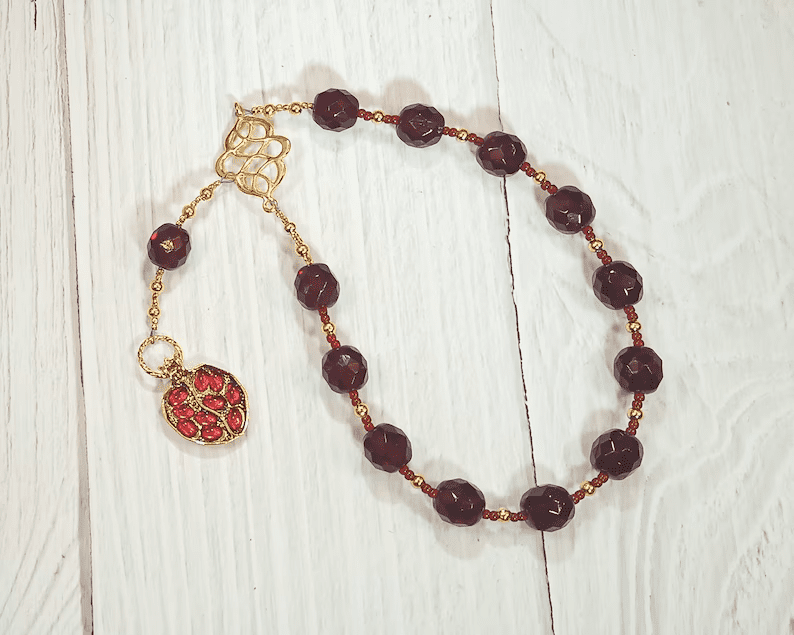 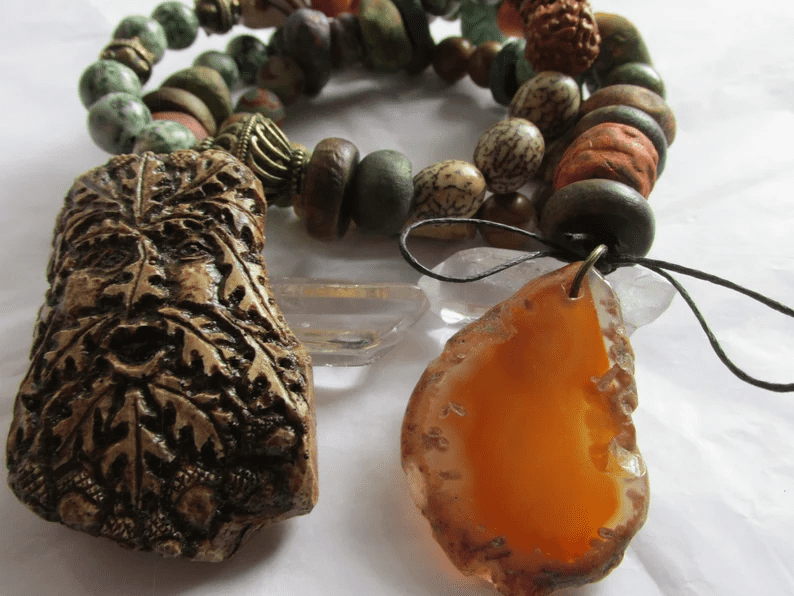 But what exactly are prayer beads?

They’re small pieces of jewelry that represent prayers. When you pray, you hold them in your hands and say certain words over them, using the beads to count the number of times you pray. This creates vibrations that allow you to connect with the divine.

These are special prayer beads that are designed to appeal to pagans. Pagans believe in the existence of spirits and gods who live among us. They worship these spirits and gods through rituals and ceremonies.

Some pagans use prayer beads to communicate with these spirits and gods. They may wear them around their neck during rituals and ceremonies.

Or they may carry them in their pockets. Either way, they are used as a tool in mystic traditions to form a deeper prayer life.

So what are pagan prayer beads?

They look similar to Christian prayer beads. However, they differ in one important way. Instead of having Jesus Christ at the center, pagan prayer beads feature symbols of pagan deities (or they may be simple so they can be used for any deity’s prayers).

Pagan practitioners use meditation beads to focus their intentions and energies. For instance, a practitioner might string several beads together to represent the elements of earth, air, fire, water, and spirit. Then, the practitioner would visualize each bead representing a specific element, and mentally send out a wave of positive energy toward the desired goal.

How to use prayer beads

First off, let me emphasize that there’s no wrong way to use prayer beads. The only requirement is that you must believe in the power of prayer and the spirits that you wish to pray to.

When praying to the spirits, it’s important to focus on your intentions. Rosaries are most often used to ask them to bless you and guide you in your life journey more than asking for material gain.

Finally, decide on the set of prayers that go with your beads.

Why use pagan prayer beads?

I was recently asked this question by a friend who wanted to learn more about prayer beads.

Prayer beads offer a way to embrace your mystical practice on a regular basis. You can use them to connect with the spirits and gods. And when you do so, you’ll find that they have a positive impact on your spiritual growth.

No matter which pagan beliefs and ideals you adhere to or what type of daily practice you follow, pagan meditation beads are an excellent way to enhance your workings, and stay connected to the Divine – whatever that looks like for you.

To sum things up, prayer beads help you connect with the divine and achieve inner peace.

People from all walks of life use prayer beads. Rosary prayers are common among devotees of Santa Muerte, especially due to their inherent connection to folk Catholicism. Any set of prayers can be adapted to fit a rosary or prayer bead string.

The biggest benefit of using prayer beads as a pagan is the way they center your life around a regular devotional practice.

If you’re looking for something to add to your spiritual practice, then consider getting some prayer beads.

Do Wiccans use prayer beads?

Prayer beads are not a requirement in Wiccan tradition, but many Wiccans do turn to rosaries and strings of beads to live out their faith.

Wiccans often use prayer beads because they are an easy way to incorporate their spirituality into their everyday lives. Pagan meditation beads can be useful for any witch or occultist looking to deepen their relationship with the gods.

For example, if you’re a witch who wants to meditate, you could use a set of pagan meditation beads to help you focus your mind.

What are the benefits of using prayer beads?

Using prayer beads has many benefits. Here are just a few:

Why do rosaries have protective power

Many pagans believe that using prayer beads will keep them safe from harm. They think that wearing a necklace or bracelet made of beads will ward off evil spirits.

This belief stems from the fact that ancient cultures believed that certain objects had magical powers. For instance, it was thought that stones were imbued with magic properties.

When you wear a necklace or bracelet made from these stones, you’re actually putting yourself under the protection of the energies represented by the stone.

When you pray to the gods, you’re asking them to bless you and turn their benevolent attention to you. If you want to make sure that you don’t suffer any misfortune, then you should ask the gods to watch over you while you’re doing this.

You can also ask the gods to give you strength and wisdom. So, if you want to feel protected and blessed, wearing a rosary and praying with the beads is a good idea.

Can you make your own prayer beads?

Yes, and it’s simple! You don’t have to be a beading expert to honor your gods this way. You can make your own string of prayer beads to fit the number of prayers you wish to do for your deities. All it requires is some knot work, string, and beads.

You can add magick to the string with knot magick too!

Making your own string of prayer beads is a wonderful devotional practice that can bring you closer to your personal gods.

If you’d like to learn how to make your own prayer beads, check out the beading instructions in this article.

Some pagans choose to string their own beads, but there are plenty of shops where you can purchase pre-strung beads sick as HearthfireHandworks.

Can I wear the beads around my neck?

Yes, these prayer tools can be worn around your neck. If you make your own, you can make them to be worn as necklaces or bracelets. There’s nothing stopping you from turning your beads into pagan jewelry!